A noun is a noun, unless it is a verb 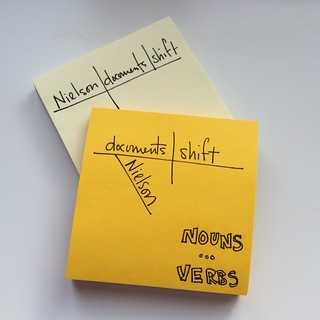 October is the awareness month for ADHD, dyslexia, and learning disabilities. In honor of it, here is a recent example of how my dyslexic brain sometimes looks at words.

Two days ago, I received an analytics newsletter with the following headline: “Nielsen documents shift in time toward digital video and game consoles.”

When I looked at the sentence, I kept reading “shift” as the verb and “Nielsen documents” as the noun.

That way of reading the sentence just didn’t work. What do you mean, the documents are shifting in time? Are we talking sci-fi here? And what does that have to do with video games? (That is, other than the truth that some video games include time shifts.)

That unconscious confusion kept me from digging into the newsletter. Though the questions I listed above were happening in my brain, they weren’t happening consciously.

Each time my eyes happened upon the headline over over the last couple days, I didn’t decode it and then went back to something else.

Finally, just now, I looked at the sentence again and the message fell into place.

What it’s trying to say is: A company (which is known as Nielsen) has documented that people are spending more time on digital video and game consoles, instead of spending that time on other things. Phew! What a difference that is from pieces of paper shifting through the space-time continuum.

My dyslexic mind is so integrated with how I see the world that I sometimes don’t realize that it’s why I don’t understand something.

If we all do both of those things, just imagine what we can accomplish! Someday, documents may indeed be able to traverse the space-time continuum.