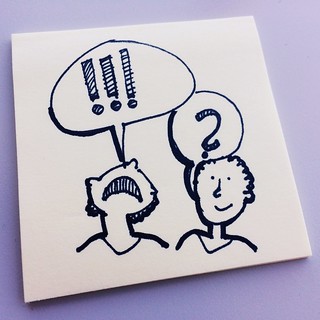 “People will yell at you.” Yep, that’s one of the things we were told comes with the role of co-chair for IA Summit. We were advised that the best way to handle it was to band together, find the strength in our team, and try not to take it too personally.

Though we appreciated the warning and the advice, I wasn’t sure that building a defense was the only solution. Avoiding yelling seemed more desirable.

After we got the “beware the yellers” advice, we tried to find out who would be most likely to lead the assault. Two things stood out to me once we’d gathered a list.

Indeed, they were some of the people most committed to our community. Upon reviewing the list, we came up with a plan—I would proactively seek their advice.

The conversations were not unlike user interviews. Each time I talked to someone, I did the following:

Just like a user interview, I talked with the person one on one, and each conversation was mostly the other person talking.

The conversations worked great. We learned something valuable from each person I interviewed. They got to help us out, and, by us reaching out to them, they didn’t have to raise their voices to be heard.

When someone opens with negative emotions, it can be difficult to respond with listening. Instead, we humans easily become defensive. We want to tell them that they’re wrong and they should buzz off.

I’ve had to work hard to learn how to choose receptiveness over defensiveness. I still fail sometimes. The conversations that do work, however, serve everyone well.

If you’d like to use listening to help handle difficult conversations, I highly recommend that you: